We checked out of Hotel Rilano and the next stop was Berlin. A bit of experience of Chill weather of Wolfenbüttel railway station awaited the chefs; some chefs were seen warming up with brisk walk around the station.

After a change of train from Braunschweig,  we were off in a train to Berlin.

Seating on a ICE train

Since we were in a group it did not matter much, except that I always wanted to be with Amudha and a quick exchange of seats once we tugged our luggage in the compartment was always on. Also to be understood was the wagon number and the positioning of coach on the platform. These were important as the trains were on the station for a maximum of two minutes and a big group like this it was some task. The group by now had almost grasped these nuances of getting in to the train quickly and settling down. Here in this particular coach, there were already some guests in the seats that were allocated to us. A quick conversation albeit English- German resolved the situation. The German guests were indeed in the wrong Wagon!

At the Berlin station we gathered at the entrance and it was a short walk to the Motel One. A  round of Sandwiches and we were off  on a tour of Berlin. This turned out to be a memorable one. The guided tour took us to various historical places in Berlin. The story was amazing and of course one had goose bumps when in a place as significant as Berlin. The turbulent recent past of Berlin was explained in vivid detail. Though it was pointed out that it is the largest city in Germany with a population of 3.2 million, we gently reminded our German friends about city of Bangalore that is now 10.8 Million. We had a chance to be at the Brandenburg Gate, saw the last remnants of the famous Berlin wall, the holocaust Memorial, Unter den Linden Boulevard, the pregnant oyster ‘Haus der Kulturen der Welt ‘ and of course we were on the cruise in River Spree.

I have to mention Daniel Metz of MKN, our gracious host was all the way with us along with the team from MKN – Mohua Das and Rehteesh – and the hospitality extended was awesome. We also witnessed lot of processions and demonstrations by citizens of Berlin, which were peaceful though, but resulted in diversion of our bus at various points. This offered us a great view of Berlin wall from our coach.

The day was literally off day for Chefs and the dinner was at Georgbräu restaurant near the hotel. Many of us switched to beer as the Oktoberfest fever -The Bavarian annual festival is well known for music, beer and known as world largest festival was on. 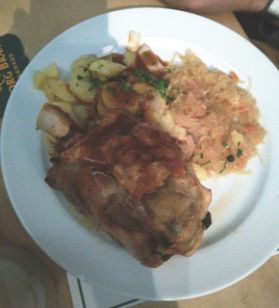 The travel and tour of Berlin were one heck of day and after dinner,  I was looking forward to get back to the hotel for some much needed rest. Some of the chefs were also looking to get back but for other reasons. The Oktoberfest was on in a venue near the hotel and the special energized team landed in the venue and continued to party late in to the night.  (It was though an off day from the culinary point of view, but a hectic day from the tourist point of view)

Request you to leave your comments or contact me at vvbhaskaran@yahoo.co.in